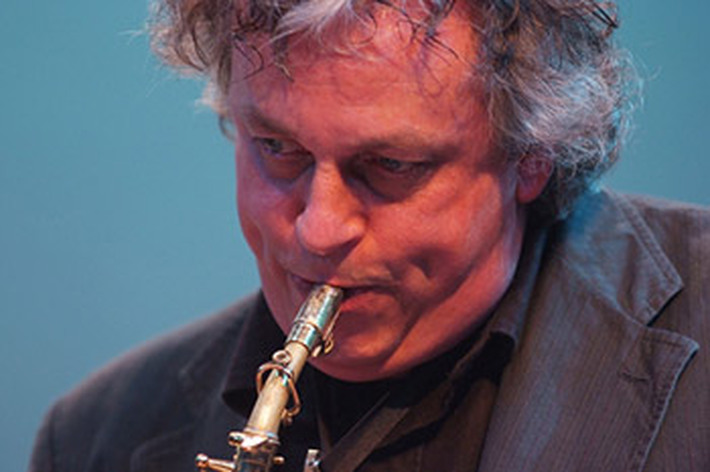 Lee Goodall is a talented multi instrumentalist whose main instruments are soprano, alto, tenor, baritone, flute and bass flute. Composing has been a large part of his life and he has worked as a composer for the BBC on projects including the radio plays "Waiting for Concord" and "Clara".

He lived and played in New York, USA for many years (1979-1985) performing with a great variety of line ups including Sahib Sarbib's "Multinational Band".This band recorded one lp/cd with Lee.

Lee played on some recordings for "Island Records" with singer Jess Roden who is about to release a 5 CD collection entitled 'Hidden Masters'. Lee is co-composer on some of the material.The producers for this project were Phil Ramone and Joel Dorn and Lee played on sessions with Steve Gadd, Marcus Miller,Will Lee and Dr John amongst other notables.

He played alto, soprano and flute as part of Keith Tippet's "Tapestry" orchestra and appears on "First Weaving", a cd release from 2009.

He now lives in Newport, South Wales where he has built an outstanding recording studio (www.oakfieldstudios.com) and has had many fine jazz and classical musicians through the door.

CDs from the studio are now released on "Basho Records", "The Rare Music Label" and "33 Records" to name but a few.

Lee contributes to a number of working bands in the South Wales area while also teaching at "The Royal Welsh College of Music and Drama" in Cardiff, and on a number of jazz summer schools, namely the original "Barry Jazz Summer School" that has now moved from Wales (after 30+ years) to Trinity College. Lee has tutored on this course for over 22 years.

His recording studio has had some top jazz and classical players through the doors and there are current releases by Paula Gardiner "Hot Lament" (Lee is part of this trio), Liam Nobles "Brubeck"(now available on "Basho" records) and the great Kirk Lightsey who has released a cd entitled "If You're Not Having Fun By Now". Lee plays on two tracks of this cd.

Currently Lee is releasing a teaching work based around the modes of the major scale.This work is called "Lee Goodall's Large Scale Project". It consists of twelve 80 minute accompaniment cds (all instruments played, recorded and mixed by Lee) containing 31 exercises and grooves per cd.. plus a 240 page workbook containing all twelve keys.

There are a number of cds, featuring Lee's playing, that are due for release soon. Most notable guitarist James Chadwick's "Wacahume" with Martin France and also a release from a new band run by bassist Chris Hyson.This band is called "Little Fish". Both of these recordings were made at Lee's studio.

Lee was voted most popular jazz saxophonist in Wales in 2009.