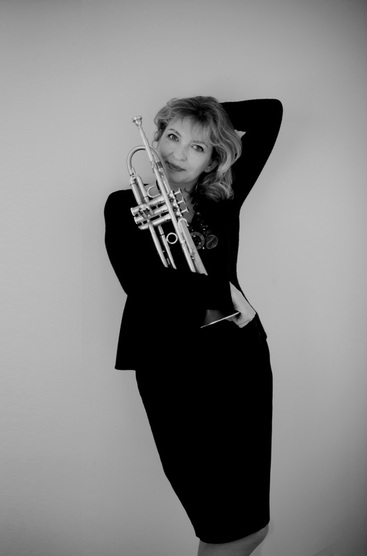 Photograph by PETER PRIOR
Since being tipped for the top by Jazzwise magazine, Sue Richardson's career has been going from strength to strength. With her latest CD, Fanfare, Sue has firmly cemented her position in the jazz world - “There are singer-songwriters behind every tree, but Sue Richardson is the only trumpeter-singer-songwriter you are likely to encounter. She plays swinging jazz trumpet, with excellent technique and a remarkable command of a variety of styles. She sings with a musician's phrasing and her songs come with proper tunes and grown-up harmonies attached – a rarity in itself. ...Conclusive proof that this is no mere gimmick.” The Observer

Archie on hearing Sue’s playing for the first time commented “She can sure growl!”  Sue is currently working on a new project, Too Cool. It brings her love of Chet Baker and her sensitive writing together into a new show interpreting aspects of Chet’s life not just through his most famous recordings but also his own compositions. 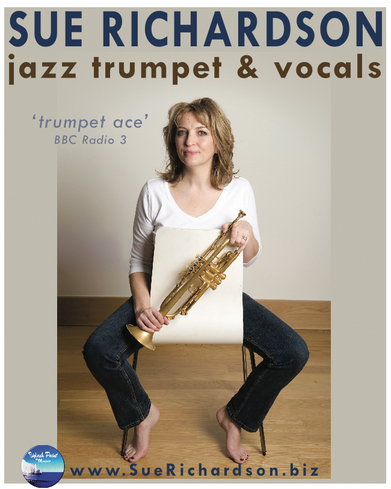 Recently Sue has been honoured to work with The Humphrey Lyttelton Band. Clive Davis writing in The Times compared her style to Humph’s: “When the cast of I’m Sorry I Haven’t a Clue led a high-spirited tribute to the late Humphrey Lyttelton at the Hammersmith Apollo last year, the trumpeter Sue Richardson was among the many musicians who helped to give the old man a stirring send-off. Some of his insouciant comic timing seems to have rubbed off on her as well: she is a breezy presence on the bandstand who is quite happy to make self-deprecating asides about the everyday problems of finding a lipstick that doesn’t leave sediment inside her horn. More to the point, she also possesses something of Hump’s flair for constructing a concise, neatly crafted melody. If Chet Baker and Clifford Brown are two of her main role models - her timbre is warm and full-bodied - her soloing, while avoiding high-note theatrics, evokes the generosity and exuberance of players from the swing era.” The Times

Touring with big bands by the age of 16, Sue’s musical journey has seen her gigging in over 50 countries in hotels, jazz clubs and on cruise ships. You can even hear her recorded version of The Girl From Ipanema being played in Rio in the famous bar where the song was written. She has worked for the BBC, performing at The Last Night of The Proms and gaining a Blue Peter badge for her singing!

Sue’s gigs are a great combination of her original songs and imaginatively reworked standards, revealing her love of Ella Fitzgerald and Chet Baker. The musicians in the band also take centre stage with well thought-out solo spots. The tightly-knit band have taken their special brand of modern jazz with a main stream twist to many venues on the national and international circuits. Recent appearances include the Crest Festival, France, Brecon, Scarborough, Swanage and London Jazz Festivals, The Royal Albert Hall, The Royal Opera House with Liane Carroll, The 606 & Ronnie Scott’s. 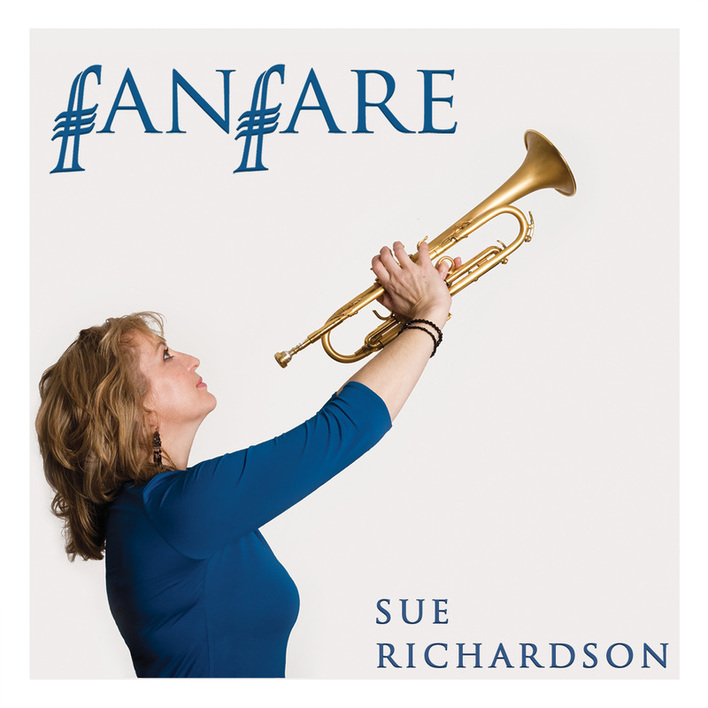